Playing a positive-natured brand of hardcore-tinged Celtic punk, Flatfoot 56 has been unleashing itself upon America and the rest of the world for over 10 years now. Forming in 2000, the Chicago natives achieved nationwide attention with their first two label-backed records, 2006's Knuckles Up and 2007's Jungle of the Midwest Sea. These releases built on a heavy dose of previously established regional notoriety, helping the band gain steam early on.

While each record received its fair share of acclaim, the quintet exploded onto a new level with 2010's Black Thorn. Landing the band on a total of 9 Billboard Charts, Flatfoot 56 proved it could consistently reach an expanding audience while treading in a genre not often associated with widespread success.

Frontman Tobin Bawinkel (vocals/guitar) is now set to lead Flatfoot 56 on in their furious march forward. Armed with brothers Justin (drums) and Kyle (bass), along with Eric McMahon (bagpipes/guitar) and Brandon Good (mandolin/guitar), Flatfoot 56 is now preparing to enter the studio again to record its fourth label-backed studio album.

Like Black Thorn, Flatfoot 56's new album will be produced by the Street Dogs' Johnny Rioux. "We decided that since the last experience with Johnny was so beneficial, we wanted to repeat it," Bawinkel said. "We have been friends with Johnny for years our mutual respect fosters a good creative environment for putting together a record. He knows how to challenge us and push us the next level, which is what any band hopes for."

The band will enter Matt Allison's Chicago-based Atlas Studios in January to record its first release for Paper + Plastick Records. "We have always respected Paper + Plastick's independent approach to putting out records because they always seem to promote the creative side of the album," Bawinkel said. "As a band we all really value that creative vision, and Paper + Plastick is the place to be for that."

While the record is set to be more rootsy and folk-oriented, it promises to pack the same relentless knock-down punch that fans have grown to expect from Flatfoot 56. More than a decade into its career, Flatfoot 56 isn't slowing down, but maintaining a blistering pace of touring and musical output. "The next record's sound is taking on a much more mature, heartfelt tone," Bawinkel said. "We're writing these songs as life gets thrown at us, and as we all get a bit older and start to interpret life in different ways, we want to express ourselves to reflect the victories and defeats that we all go through. We still love whipping the crowd into a frenzy and making everybody dance but we want to write some tunes that people can relate to, and that they can sing along to."

The band's new album "Toil" will be released on Paper + Plastick in the United States, Stomp Records in Canada, and People Like You in Europe.
The forthcoming new album, Black Thorn, tightly packs the quartet's eclectic and driving musical charge into thirteen tracks that celebrate the pride of the working class and their Chicago roots. A collection of songs that delves into weighty thematic content, Tobin explains that the cohesive theme of Black Thorn is a fundamentally universal one. "Everyone goes through hardships, but you aren't alone. Punk rock is about community and brotherhood. This record is our contribution to that." As cathartic as it is ambitious, Black Thorn is an emphatic assault that remains vintage Flatfoot in its effortless combination of Celtic instrumentation and street corner punk rock. Bagpipes and mandolins remain just as vital as drums and guitars in defining Flatfoot's sound.

The band's new album, Black Thorn, was released in March 2010 and consistent with the band's unequivocal work ethic, loads of tour dates are currently being mapped in support of the band's Black Thorn release 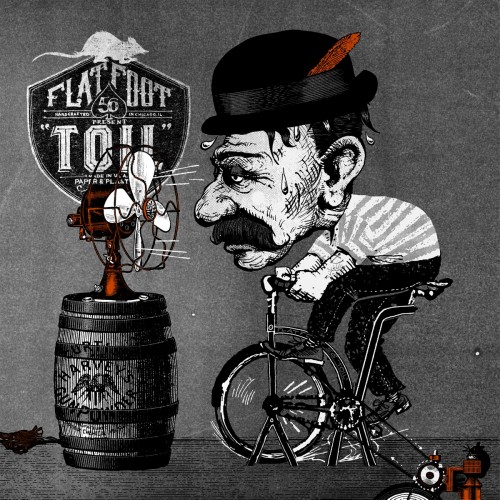