With eight years under their belt and countless international tours to prove it, the Koffin Kats show no sign of slowing down. This trio blasted out of Detroit in June of 2003 with the mission to not stop for anything. Vic Victor (Lead Vocal, Upright Bass) would join forces with long time friend Tommy Koffin (Guitar) and start laying the ground work for the sonic assault known as The Koffin Kats.

They put together songs about drug use, self loathing, and all things evil. With Eric "e Ball" Walls (Drums) they began to stomp the shit out of Detroit and the surrounding area. The next couple of years proved to be up and down with drummer changes and the release of their first three albums - S/T (2003), Inhumane (2005), and Straying from the Pack (2006).

This onslaught caught the attention of many and helped to cement The Koffin Kats as one if the top acts in the world of punk rockabilly. In 2007 Vic and Tommy hooked back up with Eric to get ready for the Fourth album- Drunk in the Daylight (2008) - and began what the Kats are known for- NON STOP TOURING. With their love for their fans and for the road they set out to play everywhere willing to listen to them. They have done this ever since and now have joined forces with Stomp Records to release their 5th album "Forever for Hire" in October 2009. 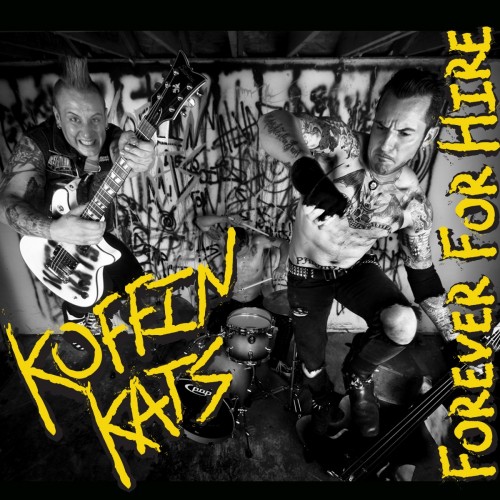