RULES are a four piece psychedelic hardcore punkrock band based in Southern Ontario. The group was formed in 2014 by Canadian tour veterans Chuck Coles (The Creepshow, Organ Thieves), Ben Rispin (The Saint Alvia Cartel, The Video Dead), Adam Michael (Say Yes, Walk Off The Earth) and Alex Standen (The Penske File). Over the past six years, the band has managed to remain an entity despite heavy tour schedules amongst its founding members. In 2018, RULES entered Halo Studios in Hamilton, Ontario to record what is now known as THE BUMMER CIRCUS COMES TO TRUTH CITY, a title which references a joke between Coles and Rispin when they first met in the mid 2000’s.

The band performed the album in its entirety, a 35 minute assault on all senses, live off the floor and finished tracking in three takes. An experiment in sound and temperament, TBCCTTC was recorded by Roman Marcone in a traditional analog fashion, using a world class SSL4000 board, purchased from Doppler Studios in Atlanta. The legendary board was used by world class artists like Stevie Wonder, Justin Beiber, Pearl Jam, and Bruce Springsteen to name a few.

The album also marks the last works credited to legendary engineer Nick Blagona, who is known for his work with The Bee Gees and Deep Purple.

Rules laid stagnant for the past two years while members were busy on other projects, but in 2020, Rules plans to support THE BUMMER CIRCUS COMES TO TRUTH CITY in any way possible. 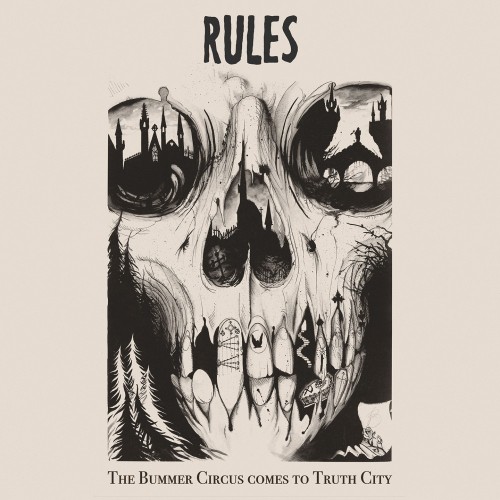