Berlin based quartet The Offenders are back with their new album, 'X', and celebrating the 10th anniversary of their formation. The new record, the band's 6th studio album, is a 12 track melting pot of trad-ska, punk rock and rocksteady, packed full with singalongs, rockabilly inspired licks and hammond organ for good measure.

Inspired by emotional turmoil, life-changing experiences, wasted nights, troubled times and the reality of everyday life, 'X' is an incredibly honest and genuine collection of tracks.
"I was never a poseur, writing about things I never lived, understood or felt passionate about. I will never play the tough and wise guy" says Valerio, vocalist/guitarist. "I've been honest and loyal to myself and to our fans throughout the duration of The Offenders, and that's never going to change."

"Alles Muss Raus (Everything Must Go)" refers to wild nights in the clubs of Kreuzberg; likewise "Harsh Reality" to life in the suburbs, where people have to deal with cultural differences, racism and decay. Stand out tune, "St.Pauli Swing Jugend" brings to light the glorious swing kids of Hamburg during the Nazi rule, where dancing to black music was strictly forbidden. Many of them faced jail time or even worse, just because they opposed racist regime.

Having originally formed as a 2tone revival band in October 2005 in Southern Italy, the last 10 years have flown by for The Offenders, seeing them constantly touring their brand of "Hooligan Reggae" throughout Mainland Europe, as well as ventures to Russia and China along the way. The Offenders relocated to the vibrant and multicultural hub of Berlin in 2009, after growing tired of their sleepy, small city of Cosenza, Italy, adding to their fascination with the subculture of the German capital. The relocation lead to The Offenders being snapped up by Grover Records for their second album, 'Action Reaction', and Muttis Booking (who are still working with the band to this date).

The backbone of the band has remained a constant with Valerio (Guitar/Vocals) and Checco (Drums) playing since their conception. Alex (Organ/Keys) joined in early 2009 whilst the band had bass players guests from all over the world, until permanent and current bassist, Puck, joined.

2012 saw The Offenders sign to Destiny Records for the bands fouth studio album, 'Lucky Enough To Live' and this was followed by the release of 'Generation Nowhere', the bands fifth studio, in 2014. Both albums had prolonged success in Amazon's Ska Top 10 Charts.

2015 will see the release of 'X', which is an international cooperation release with Bomber Music (UK), Destiny Records (GER), Rudys Back (FR), KOB (IT) and Stomp Records (CAN).

'X' was recorded at Out-o-Space Studios, Gottingen Germany and mastered at Pauler Acoustic in Northeim Germany, between May and June 2015. 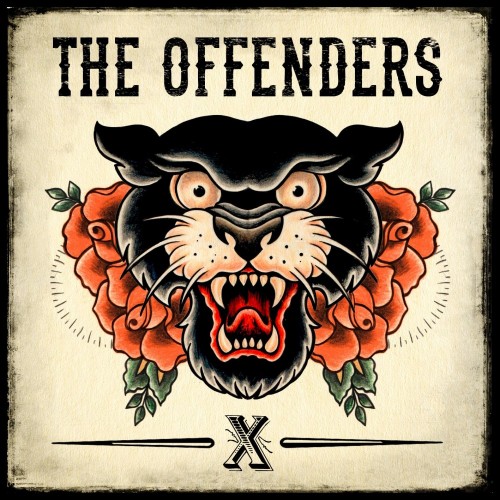